The Kansas City Royals should be in “tank mode” (there’s t-shirts and everything). They sit in the bottom of the AL Central, and they are battling with the Baltimore Orioles for the worst record in baseball overall. Already the Orioles are starting to lean in fully to the “tanking” strategy, as evidenced by them trading superstar Manny Machado to the Los Angeles Dodgers for a gaggle of prospects. One would think the Royals would also be “all-in” on such a strategy, eager to follow the lead of the O’s in order to keep pace for the No. 1 draft pick in 2019.

However, it seems like the Royals, both on the field or in the front office won’t go down this season quietly.

Already the Royals are 3-0 in the second half thanks to a weekend series sweep of the Minnesota Twins at Kauffman. And if that wasn’t enough, general manager Dayton Moore made an aggressive move in the wake of Jeurys Familia being traded from the Mets to the Athletics:

The Royals acquired OF Brian Goodwin from Washington for minor-league pitcher Jacob Condra-Bogan. Goodwin can play all three spots.

The move by the Royals is an interesting play, as it somewhat contradicts the notion that the club is “tanking.” “Tanking” teams are giving up Major League players for Minor League prospects, not the other way around. Nonetheless, let’s take a look at who the Royals received in the trade, who they give up, and why they decided to trade for the 27-year-old outfielder.

Who did the Royals receive?

Since Jorge Soler went down with a foot injury in June, the Royals outfield has lacked depth and effectiveness. While Alex Gordon has held down the left field position this season, and Jorge Bonifacio has added some stability after returning from suspension, it’s been a bit of a rotating door in center field. Abraham Almonte underwhelmed and eventually was released by the club. Rosell Herrera has flashed some promise from time to time, but it’s clear he’s not a long-term solution. Paulo Orlando is a far cry from what he was a few seasons ago, and Alcides Escobar may offer some athleticism and defense at the position but doesn’t hit well enough to justify him moving into the outfield.

Goodwin, on the other hand, is a pure outfielder who comes in with a lot of accolades over his Minor League career, though his star has faded a bit over the past couple of years. Goodwin is a former first-round pick who was drafted by the Washington Nationals 34th overall in 2011 (the same draft year as Bubba Starling). Immediately, Goodwin was praised for a strong tools set, which included plus-speed, a solid ability to make contact, and a mature batting eye for his age. Going into 2013, Baseball America ranked him as the 70th best prospect overall, and Jonathan Mayo of MLB.com ranked him as the 52nd best prospect overall.

Before, when I was writing on prospects at my Giants-centered Minor League site, Optioned to Fresno, I covered Goodwin leading into the draft. Here’s a snippet on Goodwin from that post written in 2011, where I quote a scouting report on Goodwin:

“He does a lot of little things well, and has four legitimate tools, lacking power as the only tool to make him the always coveted five-tool talent. And despite his lack of power, Goodwin will surprise you with his pop from time to time. Most of his power goes to the gaps, and his 6.5 speed allows him to leg out plenty of extra base hits. His bat is made for contact, as he excels at putting the ball in play and going with pitches to drive the ball up the middle and the other way. He is extremely fast out of the box, and gets down the line to first base as a left-handed hitter as well as anyone, allowing him to be a threat on infield grounders and bunt plays.”

Despite the praise and high expectations, things never went as planned for Goodwin in Washington. First, he was unable to find many opportunities in a crowded outfield that included Bryce Harper, Adam Eaton, Juan Soto, and Michael Taylor. Despite playing professional ball for seven seasons, Goodwin has only 144 games and 401 total plate appearances at the Major League level. With Soto and Eaton entrenched in the long term, and the Nationals most likely making a play for Harper this off-season, it just seemed like Goodwin was bound to be the odd man out in D.C.

Furthermore, while the Nationals’ outfield depth didn’t help, the 27-year-old outfielder didn’t do much to really sway management’s expectations on the field. In the minors, Goodwin has a career .253/.343/.399 slash with a .742 OPS and 53 home runs in 2,399 plate appearances in 565 total games. While those numbers aren’t bad by any means, they don’t “wow” or demonstrate that the Nationals were missing out on a lot. That being said, in Goodwin’s most extended stint in the majors in 2017, he actually impressed, and show glimpses of what he could do with regular playing time.

Unfortunately, despite the promising extended look last year, Goodwin didn’t get much consistent playing time this year, as he filled in mostly as a pinch hitter with the big league club. He only has appeared in 48 games and has only 79 plate appearances, not much of a sample. And in that small sample, he only hit .200 with a .674 OPS and three home runs.

Goodwin will get a lot of starts and at-bats in the center field position this year, as he will be an upgrade over more free-swinging options such as Herrera, Orlando or even Escobar. The former supplemental-round pick demonstrates a patient approach, as evidenced by a 12.7 percent walk rate this year, and a 36.3 percent swing rate (it was 41 percent last year). To be more effective, he will need to improve his strikeout numbers, as he is striking out in 32.7 percent of his at-bat this year and posted a 24.8 percent K rate a season ago. That being said, considering this club’s problems with free-swinging out of the strike zone, Goodwin’s approach (he has only swung at 22.4 percent of pitches outside the strike zone this year) may be a nice change of pace for this Royals lineup.

Another question will be how Goodwin adapts in the outfield along with Bonifacio and Gordon, who both have their issues defensively. In the outfield, Goodwin was rated as 5.4 runs below average defensively last season in his extended stint, and the fans scouting report from last year wasn’t too glowing either. While Goodwin will have his shot for playing time in the second half, his defense may be the difference in terms of him getting regular playing time, or simply being a fourth outfielder in Kansas City. 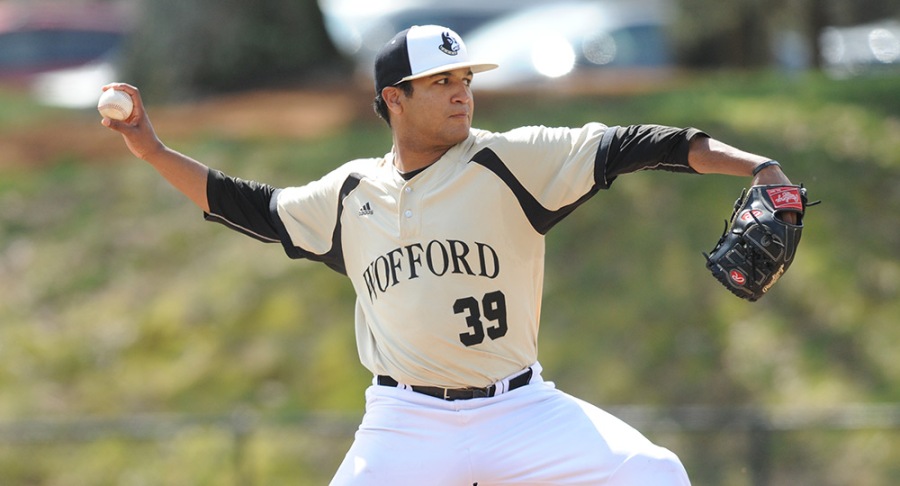 Who did the Royals lose?

The Royals traded relief pitcher Jacob Condra-Bogan, a 32nd round pick in the 2017 MLB Draft who came from Georgia Southern (He was drafted originally by the Toronto Blue Jays). By no means is Condra-Bogan an elite prospect, as he is currently 23-years-old and playing in Lexington (where he is 1.1 years older than the average prospect). But, Condra-Bogan has demonstrated good command in his first full big league season, as evidenced by a 2.08 ERA, 0.77 WHIP, and 39 strikeouts in 26 innings with the Legends.

Condra-Bogan has an interesting backstory, as Maria Torres of the Kansas City star profiled him on June 1st. It’s definitely worth reading if you want to get to know more about the 23-year-old, who bounced around the foster care system growing up. However, while Condra-Bogan definitely is a feel-good player worth rooting for, he didn’t have much of a prospect ceiling as an older, relief-only arm. So it’s not a huge loss overall for the Royals farm system. Nonetheless, Condra-Bogan has his share of fans, as evidenced by the Tweet below:

The trade is fine, but I’m kinda bummed Jacob Condra-Bogan has to go.

Final numbers in Lexington were…

Why did the Royals make this trade?

I found this Tweet pretty interesting from Down Under Fan (@RoyalDUF), who would have preferred the Royals go with some internal options in Omaha rather than acquiring the Nationals castoff.

So Dayton could not help himself. Had to go get another cast off to replace Almonte rather than promote Schwindel or O’Hearn. When will this idiocy stop. It is really getting old and tiresome @Royals.

In many ways, I empathize with RoyalDUF. The Royals plan ideally should be to rebuild the system by acquiring prospects and finding which players in the system currently are worth keeping and which ones aren’t. That’s not going to happen if players are still playing in Omaha or Northwest Arkansas. Maybe Schwindel or O’Hearn are Four-A players, but the Royals won’t know that unless they get at-bats against MLB players. Acquiring Goodwin definitely impedes that process from happening.

That being said, Goodwin is a low-risk acquisition who has potential to develop with regular playing time in the outfield. After all, he was a former first-round pick, was a highly rated prospect at one point, and has demonstrated that he can produce at the Major League level, as he did last season in Washington. While Condra-Bogan was a nice arm in the system, he was an older prospect in Single-A whose upside was a middle innings relief arm, maybe a setup guy at best. The Royals didn’t have to give up much for Goodwin, so that’s a win for Moore and the Royals organization.

It will be interesting to see too if this is the first of many moves for Moore as we approach the trade deadline. It seems like it’s only a matter of time before Mike Moustakas is gone, and it also seems to be plausible that Whit Merrifield and/or Lucas Duda may be dealt as well (especially Duda, who’s been on a tear in the last couple of games). Thus, the Goodwin trade may be a sign of Moore being proactive, as Goodwin could provide the Royals with some insurance in the lineup once the roster becomes thinner and younger perhaps in the next few weeks.